5 Points In Defense of Small Dogs

In my line of work, I hear debasing comments about small dogs all the time.  They have a reputation of being “yappy,” “ankle biters,” and difficult to train.

If you’re looking for agreement from a dog trainer, you’re talking to the wrong one.  I love small dogs.  I used to think I was a “big dog person,” until I saw the light: having a small dog is just like having a big dog, except they’re more portable.  I think of them as “travel-sized.”  So why do they have such a bad reputation?

It’s important to know that small dogs come programmed with the same brain as big dogs do.  They come with the same hard-wired needs and behaviors. They are not dumber or harder to train or different in any way.  The problem is in how differently people treat them.

1. Many small dogs are undersocialized.  While very tiny dogs are more physically fragile than larger breeds, isn’t healthy for a Chihuahua puppy to be raised in isolation (read: in a purse) any more than it is a German Shepherd or a Labrador.  This leads to fear and aggression problems, the same as it would in any other animal.  For some reason, socialization is always very important to large dog owners, but not so much for those who own small dogs.

2. Many small dogs are underexercised.  That little dog has a

perfectly good set of legs, and he needs to use them regularly.  Small dogs need walks, fresh air, play dates, and extracurricular activities just as much as big dogs to maintain good behavior and health.

3. People aren’t as concerned with a small dog’s behavior.  The first time a small dog barks and lunges at a person, it’s considered funny and even encouraged with teasing.  The first time a Golden Retriever does it, it’s considered a serious behavior problem and it’s take care of immediately.  Why is that? Both dogs are in an equal amount of distress.

4. And on that note, people tend to take the house training of a small dog less seriously.  If a toy Poodle has an “accident” on the carpet, it’s easy to clean up.  If a Great Dane has an “accident” on the carpet, it’s a major project.  If this goes on for 6 months, which one of these breeds do you think is more likely to work with a professional to get it under control?  It’s not that small dogs are hard to housetrain; it’s  that accidents are much harder to miss or ignore until the habit is ingrained.

5. People don’t respect a small dog’s right to say “no.”  Let’s say you’re a fluffy little Pomeranian whose favorite spot is in your owner’s arms.  You hate being touched by strangers

(perhaps because you didn’t meet many as a puppy); it’s violating.  But, when you’re in your owner’s arms, you have no way of escaping.  You try to say “no thank you” with a sharp look, hard stare, freeze or growl, but you’re so darn cute, people pet you up anyway and laugh when you’re grumpy.  How long will it take you to figure out that growling is ineffective, but a bite makes people back off REALLY fast? Considering how smart most small dogs are, my guess is not long.

The moral of the story: Treat that small dog like a big dog.  Ask yourself, would this be okay if my Rottweiler did it?  Be aware that small dogs are more physically fragile than big dogs, but mentally, they are the same, so pretend you have a Labrador retriever instead of a Shih-Tzu and you will have a much better behaved dog! 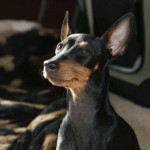 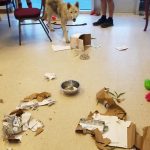