The Rules of War (tug-of war, that is)

Lots of folks think tug-of-war is a dog training no-no; that it can teach your dog to be aggressive or “dominant.”  This is a myth!  When played properly, tug is great physical and mental exercise for your dog, and a powerful reinforcer for behaviors such as a recall, “heel,” and fetch.  Tug is also used in many dog sports – it can be a more powerful reinforcer than food!  The trick is to play safely.  Follow these simple Rules of War to be sure you’re doing it right!

1. Use a special toy, designated specifically for tugging.  Keep it put away on a shelf or in a cupboard when you’re not actively playing with it.  This way, your dog will easily be able to distinguish when it’s tugging time, and when it’s not (meaning, he won’t decide to “play tug” with your scarf, bathrobe ties, purse, etc – the only time he has fun playing tug is with that particular toy!).

2. Your dog should be able to “sit” and “wait” for permission to grab the toy.  I call that permission “get it!”  Begin by having the toy behind your back or otherwise hidden.  Bring it out slooowly and remind your dog to “wait.”  Start by having him wait only a split second before you say “get it!” and put it in his mouth and tug.  Then gradually have him wait for longer and longer times before you tell him to “get it!”  You can also add some more obedience in at this stage, such as “down,” “touch,” “heel,” “shake,” etc.

3. Your dog should be able to “drop it” on cue.  Teaching this is very easy: Play tug with your dog.  Say “drop” and count to three in your head to be sure it sinks in. Then present a REALLY yummy treat.  Your dog will probably spit the toy out to eat the treat.  Repeat. Pretty soon your dog will hear “drop” and spit that toy out because he knows there’s something good coming!  After your dog is really good at “drop,” you can use “get it again!” as the reward for dropping it!

4. Safety first.  Remember, that toy is yours, and you are the one controlling access to it.  If at any point you feel your dog is getting so excited about the game that he might hurt you or someone else, simply ask for a “drop,” and quietly put the toy away.  Give him a chance to calm down.

5. Mistakes, such as grabbing your hand or your sleeve instead of the toy, pinching your finger while you’re holding the toy, or barking at you to get the toy, will end the game immediately. Don’t punish, just ask for a “drop” quietly, and put the toy away.  Your dog will eventually learn that in order to keep the fun game going, he has to use his self control and keep his teeth on the toy.  Make a mistake by grabbing a hand, and the fun ends.

The only exception to these rules are children. Young kids don’t have the motor control to be safe with this game, and they don’t usually have the good timing to get a dog to obey them.  They’re also less physically strong than adults.  If your kids want to play, try “fetch” instead – that’s a much better game for kids! 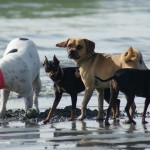 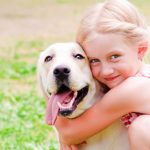